Acceptable indoor activities for kids can be tricky. But with our selection of shows and movies, now you can justify Netflix as one of them!

We’ve all been there before: that time of day when the kids are acting like maniacs; grabbing at you and throwing things around the house like they’re competing in javelin. All you want is just a little bit of time to yourself. You’ll take twenty … ten … even five minutes.

You look longingly at the television. The devil on your shoulder tells you just to do it. You wait for the counter-argument, but it must be time for the angel’s coffee break.

You know you shouldn’t succumb to just plopping the kids in front of the screen. ‘Good parents’ don’t resort to the electronic babysitter. It’s not how things are supposed to be done.

But you may just lose your mind if you don’t.

The guilt starts to take over. Will you be filling their heads with trash? Will it be nothing but mindless entertainment? Can you really justify their use of the remote control as ‘developing fine motor skills’? There are so many tough questions.

And here is the answer to all of them…

Stop being so hard on yourself. Stop thinking you’re doing anything but an absolutely amazing job. Raising kids is really hard work. Your parents left you watching plenty of films and television shows as a child, and you turned out fine.

Besides, there are only so many indoor activities for kids you can take that involve you being involved in elaborate role-playing.

You just need some guidance about the best things your kids can watch while you have a glass of wine. Um … we mean ‘get dinner ready’. 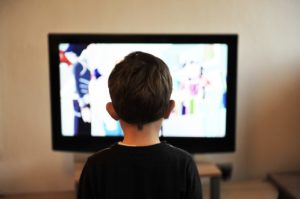 Guess what! We’re here to help with that! We’ve compiled our own carefully-crafted selection of the top ten Netflix options for your little ones. We weren’t limited by era or genre—just as long as two criteria were satisfied: each choice needed to have maximum distraction combined with still being an upstanding and wholesome selection.

So, without further ado—and in alphabetical order so you can find them as quickly as humanly possible when the tantrums start—is our list of the top ten Netflix picks for your little ones.

Follow That Bird (1985)
Let’s start with a film set on the most famous address there is—Sesame Street. Follow That Bird sees a beloved Muppet, Big Bird, sent away to live with a family of dodos because he’s told he should be living with other birds. But after he finds his way back home, he teaches those who had him leave that family is not about looks, and that the residents of Sesame Street are his real family.

Harry Potter (2001–2011)
Perhaps you’ve heard of him? Wizard and so on? Not much needs to be said really. A vibrant, magical series of movies you can gradually expose your children to as they grow and develop.

How to Train Your Dragon (2010)
Children really are spoilt for choice when it comes to visually-satisfying movies that will leave them with a sense of wonder. But visuals will only take them so far; a storyline that makes them think and develops their imagination is imperative too. How to Train Your Dragon is a gem of a film that teaches lessons about being yourself, being kind, and being a person who can be friends with anyone, even a dragon named Toothless.

The Lego Movie (2014)
Irreverent, funny and surprisingly profound, The Lego Movie takes every child’s favourite building bricks and adds multiple layers of meaning to the larger model being constructed. Another selection that can be as entertaining for adults as it is for kids, you may even find you learn a lesson or two as well. Just cover your ears when that song starts.

The Little Prince (2015)
One of the most beloved books of all time gets a modern-day makeover that sees it become immediately accessible for kids today. Opening with the familiar animation style of other current kids’ films, The Little Prince morphs into a quirky visual and narrative experience. It will leave a lasting impression on children—teaching them about looking beneath the surface of things to find the real beauty in life.

The Princess Bride (1987)
Some films stand the test of time for a reason, and The Princess Bride is a true classic. Subverting the ‘Disney fairytale story’ that has become increasingly dated, the film offers up adventure, heroics and inspiration for both boys and girls. It will also teach them another important lesson: to be VERY wary around Rodents of Unusual Size.

Space Jam (1996)
While it’s hard to fathom that your kids probably won’t know who Michael Jordan and Bill Murray are, it’s a pretty safe bet they’ll know about Bugs Bunny, Daffy Duck and Sylvester. It’s over twenty years old, but Space Jam is still a visual treat that’s funny and has a great message.

Voltron: Legendary Defender (2016–2018)
A great Netflix-produced show based on the cartoon from the 1980s. It’s perfect to showcase concepts like science-fiction and long-form storytelling to older children. Centred around a group of five space pilots who get swept up in an intergalactic conflict, Voltron: Legendary Defender is full of adventure, action, suspense and giant robot lions. That’s just plain cool.

Wallace and Gromit (1989–1995)
Children are undoubtedly visual creatures, and one of the most compelling styles is claymation. Wallace, the bumbling British fellow who loves cheese, and his highly-intelligent dog, Gromit, are still a pinnacle of the artform. Their three 22-minute specials A Grand Day Out, The Wrong Trousers and A Close Shave are short, sharp and hilarious enough to keep kids of all ages captivated.

The Wiggles (2013–probably the end of time)
Finally, one for the real littlies. The Wiggles is probably not the show you are going to mentally commit yourself to, but if you can stand the music then your youngest will love it. And unless millions of other parents are fibbing, the Big Red Car and Dorothy the Dinosaur will probably get you through more than a few long afternoons. Let’s face it—that sort of entertainment is priceless.

And so that’s it: the list of our top Netflix options when you’re out of ideas for indoor activities for kids! Get watching!

Got any additions for our Netflix options for kids? Let us know in the comments section below and then share this article!

One thought on “Yes, Netflix can be one of the viable indoor activities for kids”